Oriental Wisdom Academy had just finished a feng shui study trip to Guangzhou recently. We would like to share some of the information.

Guangzhou, also (especially formerly) known as Canton or Kwangchow,is the capital and largest city of the Guangdong province in the People’s Republic of China. Located in southern China on the Pearl River, about 120 km (75 mi) north-northwest of Hong Kong, Guangzhou is a key national transportation hub and trading port. One of the five National Central Cities, it holds sub-provincial administrative status.

Guangzhou is the third-largest city in China and southern China’s largest city. As of the 2000 census, the city had a population of 6 million, and an urban area population of roughly 11.85 million, making it the third most populous metropolitan area in China. Some estimates place the population of the entire urban agglomeration as high as 24.2 million, making it the 2nd biggest urban area in the world after Tokyo. The Guangzhou government’s official estimate of the city’s population at the end of 2009 was 10,334,500, an addition of 152,500 people from the previous year. When the migrant (defined as being present in the city 6 months or more) population is included, the city’s population is over 14 mln.

The elevation of the prefecture generally increases from southwest to northeast, with mountains forming the backbone of the city, and the ocean comprising the front.

A city with history of more than two thousand years. The first known city built at the site of Guangzhou was Panyu (Fan-Yü) ( 蕃禺, later simplified to 番禺; Poon Yu in Cantonese) founded in 214 BC. The area has been continuously occupied since then. Panyu expanded when it became capital of the Nanyue Kingdom (南越) in 206 BC, the territory of the Nanyue Kingdom included what is now Vietnam 越南.

The Han Dynasty annexed the Nanyue Kingdom in 111 BC and Panyu became a provincial capital and remains so today. In 226 AD, Panyu became the seat of Guang Prefecture (廣州; Guangzhou). While originally referring to prefecture only, local citizens gradually adopted the custom of using the same name for their city

Located just south of the Tropic of Cancer, Guangzhou has a humid subtropical climate (Köppen Cfa) influenced by the Asian monsoon. Summers are wet with high temperatures, high humidity and a high heat index. Winters are mild and comparatively dry. Guangzhou has a lengthy monsoon season, spanning from April through September. Monthly averages range from 13.6 °C (56.5 °F) in January to 28.6 °C (83.5 °F) in July, while The annual average temperature in Guangzhou is 22.6 °C (72.7 °F), the relative humidity is approximately 68%, whereas annual rainfall in the metropolitan area is over 1,700 mm (67 in). Extreme temperatures have ranged from 0 °C (32 °F) to 39.1 °C (102 °F).

Guangzhou, this southern city plans to expand its economy by 11 percent in year 2011 after reporting a 2010 gross domestic product (GDP) worth more than 1 trillion yuan ($152 billion). The ultimate goal of the development is to help improve the living standard of the city’s 13 million residents and make them feel happier living in the city. In his government work report, the mayor said the city’s per capita GDP – or GDP divided by the number of people living in the city – will grow by 10 percent in 2011, while the growth of per capita income for urban residents will remain at 11 percent.

Guangzhou’s GDP reached 1.06 trillion yuan in 2010, which was double its size in 2005. But the per capita income of urban residents only grew by 67.6 percent during the period, lagging behind the economic growth.

The city’s GDP grew by 13 percent from 2009 to 2010, placing Guangzhou among a small number of cities that have at least a trillion yuan in GDP. The “1-trillion yuan group” also includes Beijing and Shanghai.

To strike a better balance between the growth in GDP and per capita income, Guangzhou will concentrate this year on improving its industrial structure and adopting polices aimed at benefiting residents. Through continuous optimization and upgrading of the industrial sector, Guangzhou will accelerate its shift to the tertiary sector as the focus of its economic development.

Guangzhou’s service industry grew by 12.6 percent in 2010, accounting for 60 percent of the city’s GDP and contributing 7.5 percentage points to the city’s total growth in GDP.

“The successful hosting of the 16th Asian Games and Asian Para Games last year has helped boost Guangzhou’s international image. Guangzhou will do more in the years ahead to make people benefit more from the social and economic development we have already achieved in the past five years.”

The people-oriented government work report has been interpreted by many as a signal of the government’s determination to strike a balance between economic growth and per capita income during the 12th Five-Year Plan period (2011-2015).

There are Nine Dragons Run Into The Delta of Pearl River, which also embrace Guangzhou nicely. Coincidently, the Nine Dragon also place Guanzhou in the Acute Centre of Land Formation…….. 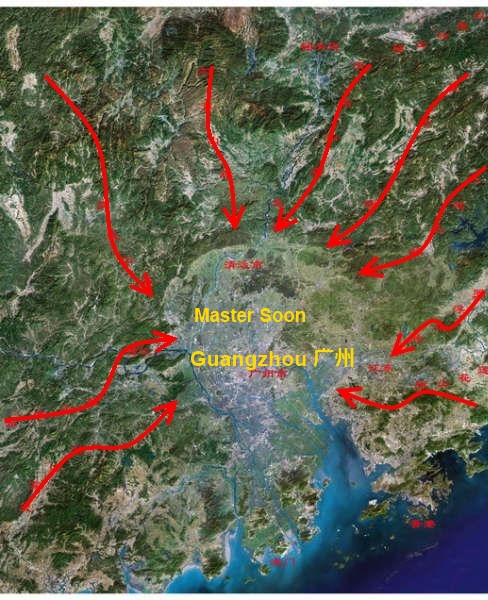 There are 9 mountainous ranges run into Basin of Pearl River, which nicely place Guangzhou in the acute centre of This 9 Dragons Land Formation.