Master Soon at Fujian Earthern Structures, it is a type of Chinese rural dwellings of the Hakka and others in the mountainous areas in southeastern Fujian, China. They were mostly built between the 12th and the 20th centuries. Fujian Province of China 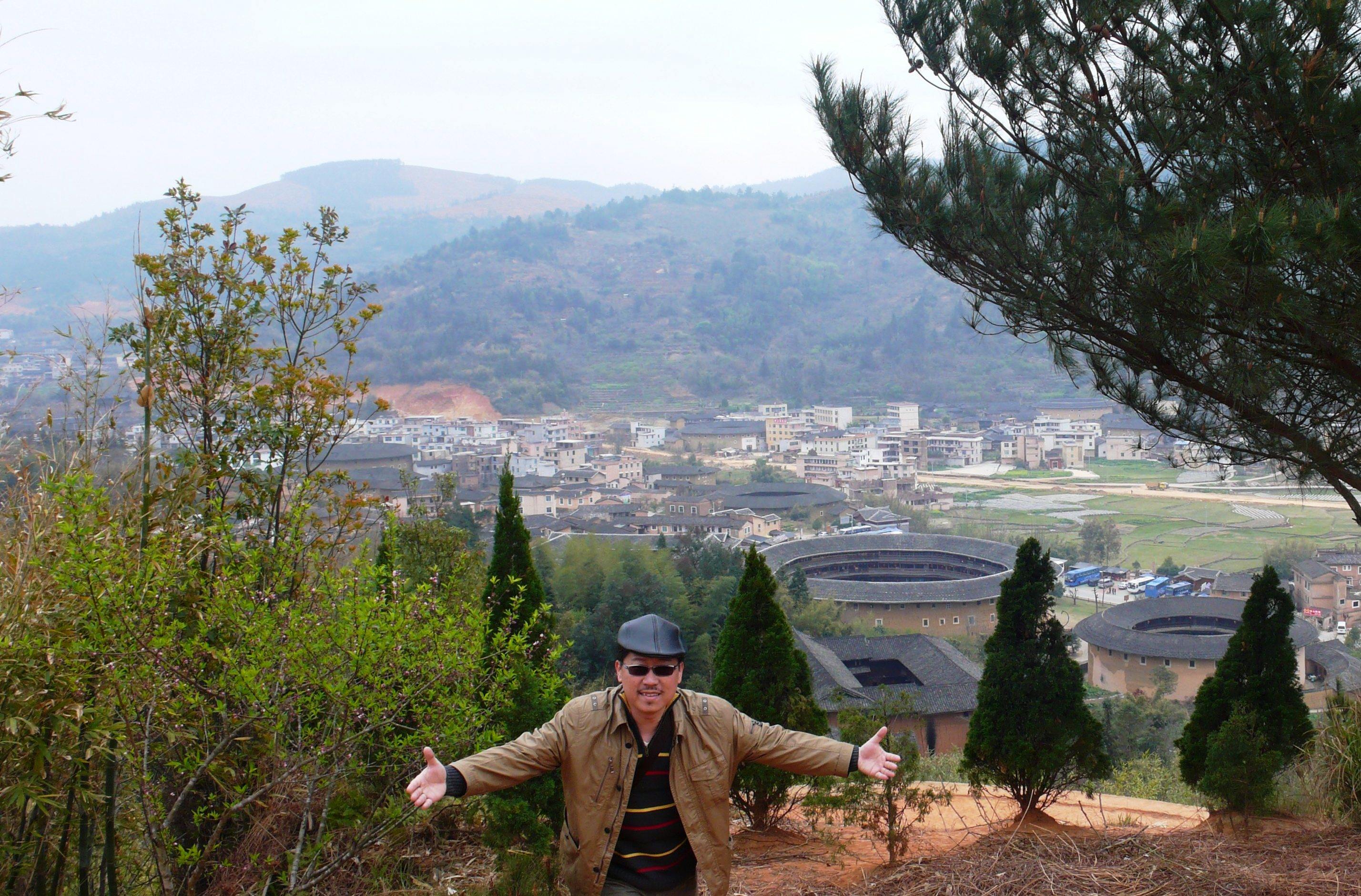 Master Soon at Fujian Tulou.Fujian Tulou is a property of 46 buildings constructed between the 15th and 20th centuries over 120 km in south-west of Fujian province, inland from the Taiwan Strait.

Fujian Tulou is a property of 46 buildings constructed between the 15th and 20th centuries over 120 km in south-west of Fujian province, inland from the Taiwan Strait. Set amongst rice, tea and tobacco fields the Tulou are earthen houses. Several storeys high, they are built along an inward-looking, circular or square floor plan as housing for up to 800 people each. They were built for defence purposes around a central open courtyard with only one entrance and windows to the outside only above the first floor. Housing a whole clan, the houses functioned as village units and were known as “a little kingdom for the family” or “bustling small city.” They feature tall fortified mud walls capped by tiled roofs with wide over-hanging eaves. The most elaborate structures date back to the 17th and 18th centuries.

The buildings were divided vertically between families with each disposing of two or three rooms on each floor. In contrast with their plain exterior, the inside of the tulou were built for comfort and were often highly decorated. They are inscribed as exceptional examples of a building tradition and function exemplifying a particular type of communal living and defensive organization, and, in terms of their harmonious relationship with their environment, an outstanding example of human settlement.

Archaeological research has revealed that there have been communal houses built of rammed earth in China, Central Asia, and East Asia since the Neolithic period (6,000 years ago). Over a long period social, economic, and cultural developments in south-eastern China were closely associated with the mass immigration of northern people. During the Western Jin Dynasty (307-12 CE), because of continual warfare and serious drought, people from central China began to migrate southward, many of them reaching Fujian, bringing with them the advanced cultures of central China, and Fujian began to thrive. In the late Tang dynasty (7th-8th century), people in central China once again moved southward on a large scale to escape the wars, many going to Quanzhou and Fuzhou along the coast of Fujian and Jianzhou in the north. Those who settled in south-eastern Fujian (Zhangzhou and Quangzhou) became the Fulao people, who spoke the Minnan (south Fujian) dialect during the course of merging with local people. Some of their descendants went even further, to overseas countries. During the later years of the Northern Song Dynasty and the Southern Song dynasty in particular (1127-1279), the conquest of northern China by Jin ethnic people forced many people in central China once again to move southward, bringing with them the language and culture of central China to form the Hakka group, now mainly distributed in Jiangxi, Fujian, Guangdong, and Hainan Provinces and Taiwan, together with millions of overseas Chinese worldwide.

The Fujian tulou seem first to have appeared in the Song and Yuan Dynasties (11th-13th centuries) and developed from the 14th and 16th centuries (Early and Middle Ming Dynasty), reaching their peak between the 17th century and the first half of the 20th century (the Late Ming and Qing Dynasties and the Republic of China period).

The first tulou buildings were comparatively small, rectangular or square, plainly decorated, and without stone foundations. From the end of the 14th century to the early 17th century (Ming Dynasty), in response to improved agricultural development in Fujian, and frequent bandit raids (attracted by the prosperity of the area) much larger tulou were constructed. As a result of an increase in the processing of tobacco and tea between the mid 17th and the first half of the 20th centuries, tulou were further developed that reflected in their size and decoration the wealth created from industry.

The tulou, although providing communal housing and reinforcing the structure of clans, were until the 20th century, mostly built and owned by one powerful individual. In the early buildings these would be people who derived their wealth from land and agriculture, (such as rearing ducks or cattle) for the later buildings trade and industry, in the 17th century shipping and tea, and later processing tobacco. For instance, the building of the early tulou in the Hongkeng cluster is attributed to Lin Yongsong, descendent of two brothers who had moved into the area around 1290, while Zhencheng Lou constructed in 1912 was built by Lin’s 21st generation descendents, two brothers who had made large sums from the Sunrise cigarette cutter factory, and spent 80,000 silver dollars on building the tulou.

Tulou built in the 20th century were often funded by overseas Chinese such as one of the tulou in Gaobei cluster where local clansmen constructed the building jointly with money provided by their overseas relative, after whom the building was named.