Bhanurekha Ganesan, better known by her stage name Rekha (born 10 October 1954) is an Indian actress from Tamil Nadu, India who has appeared in Bollywood films.

Noted for her unique adaptability, flexibility & versatility (all these are special characteristic of wind, xun trigram巽卦) as an outstanding actress (also xun trigram), Rekha was particularly recognized for playing female-oriented (also xun trigram) characters, such as that of the school-girl (mature school girl is also xun trigram巽卦) in Khubsoorat and the decisive avenger (xun trigram is wind, a windy mood, an ever changing temper) in Khoon Bhari Maang, both of which earned her the National  Filmfare Best Actress Award. Her portrayal of a classical courtesan in Umrao Jaan won her the National Film Award for Best Actress. Throughout the 1970s and onwards she has been featured as a sex symbol (trigram xun symbolizes seductiveness, erotic stimulation, tenderness desiring, affection touching, electrifying adoration & sexual temptation) in the Indian media. 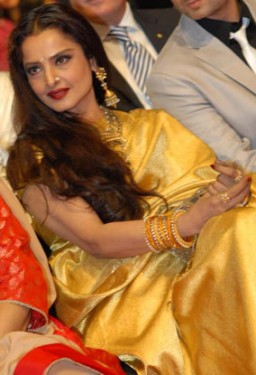 Rekha has acted in over 180 films in a career that has spanned 40 years. She has reinvented (the 2nd & 3rd Yao , 中上爻 )herself numerous times in her career and is known for her ability to sustain her status. Taking part in both Indian mainstream and art cinema (this industry is categorized under Trigram xun巽), known in India as parallel cinema, she has achieved commercial success, as well as critical praise for numerous of her performances throughout the years.

Ageless exotic diva Rekha, she is the Diva of Indian Cinema. …Ever youthful, vivacious and Legendary. So magazines describe her as Ageless & Timeless and Taj of Bollywood.

She was ugly & dusky Beauty and nobody notice her at the earliest stage. But this teen age soldiered on to find her acting fortune and planted her feet in the Quicksand of Films from being showpiece to being the Legend. From the husky, dusky but eventually evolving into India’s most glamour’s Woman (xun trigram symbolizes feminine attraction 巽為風，解為風騷).

She is able to maintain her grace and Beauty in her 40 years career. She still is doing Lead roles with Young Generation. Her name is still light up the Marques. The name is synonyms with “photogenic”.

There will be a feng shui & Yijing training program in Mumbai, April 2010.