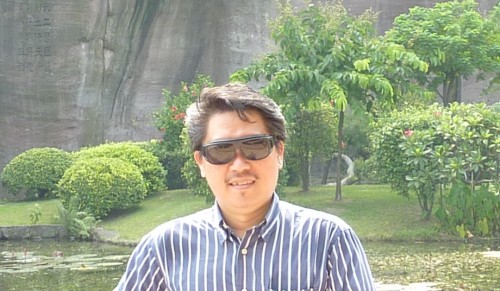 While I am in China, I still would like to wish all my Indian friends in Malaysia and India, Happy Ganesh Chaturthi today.

I wish you happy Ganesh Chaturthi by this cute Ganesha Picture.... May You have a Happy Life....

Ganesh Chaturthi (also known as Vinayaka Chaturthi) festivals and celebrations have begun today all over the world. It is a Hindu festival for Lord Ganesha who is believed to have a presence on earth for all his devotees for the duration of this festival. Ganesh Chaturthi is observed in the Hindu calendar month of Bhaadrapada and therefore usually falls between mid August and mid September on an annual basis.

Ganesha Chaturthi (Devanagari: गणेश चतुर्थी, Kannada: ಗಣೇಶ ಚತುರ್ಥೀ), also known as Vinayaka Chaturthi is the Hindu festival of Ganesha, the son of Shiva and Parvati, who is believed to bestow his presence on earth for all his devotees in the duration of this festival. It is the day lord shiva declared his youger son “ganesha” as superior to all the gods,ganesha is widely worshipped as the god of wisdom, prosperity and good fortune.